By Craig Hope for the Daily Mail

The Premier League’s rising stars will be denied the chance to play at the prestigious Hong Kong Soccer Sevens this year because of the coronavirus and ongoing civil unrest.

Sportsmail understands that the tournament — scheduled for May — has been cancelled amid concerns over the continued disruption caused by the outbreak of the virus in neighbouring China, as well as anti-government protests in Hong Kong.

The likes of Harry Kane, Jack Grealish and Sean and Matty Longstaff have starred at the event in recent years and clubs such as holders Newcastle, Aston Villa, Wolves, Leicester and West Ham regularly send strong Under 23 squads to compete. 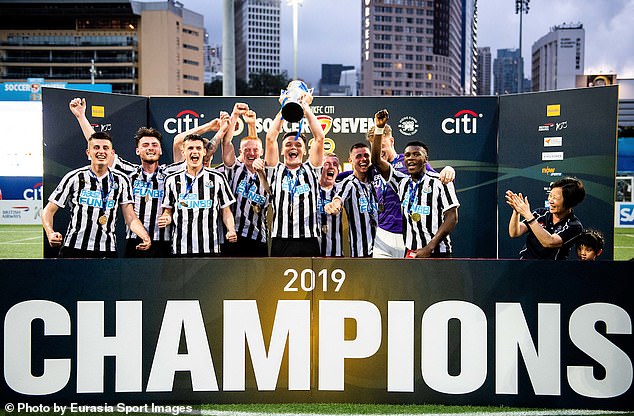 Indeed, it is the highlight of the calendar for many young players.

A Masters tournament runs parallel to the event and scores of former Premier League players turn out for a week of football, sun and partying.

Marcel Desailly was the guest of honour last year and David James, Jari Litmanen, Peter Reid and Wes Brown are all supporters of the competition.

A local tournament could now be arranged in its place and it is thought that some former players still intend to travel, having already booked their trips.

News of the cancellation comes on the back of Sportsmail revealing on Wednesday that the Hong Kong Rugby Sevens will be postponed because of the coronavirus.